Prior to installation, a 3D CAD rendering was created for the project that showcased how the building would be lit with the new color-changing LED lighting. This allowed for the client to fully visualize the look from its previous single white color to a dynamic, almost endless palette with over 16 million color combinations. It also provided the ability to see how LOCC could be used to create a wide variety of artful scenes depicting color schemes for holidays, charities and special occasions, including sporting and local events.

The goal of the retrofit was to illuminate the structure with programmable colored (RGB) LED lighting. This would not only maximize the presence of the building in the Fort Lauderdale skyline, but also complement and enhance the atmosphere of the street level for Las Olas Boulevard’s high-end restaurants and shops. The experts from LED Source® worked very closely with Stiles Property Management to develop and design a plan that respected budgets and energy efficiency, while converting the exterior lighting to color-changing LEDs. 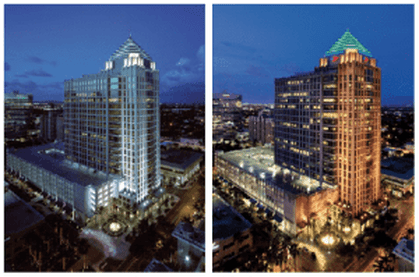 After identifying the areas that presented lighting challenges, including the 42-foot ziggurat and the roof top on the 23rd floor, the design team chose LED lighting fixtures from Philips Color Kinetics.

The cutting-edge exterior LED lighting system not only lowered operating costs, improved  aesthetics and created a more vibrant illumination for the building.

It is estimated that the LED lighting retrofit will save Bank of America Plaza at Las Olas City Centre $15,133 in lighting energy and $11,764 in maintenance, a total annual savings of $26,897. In addition, the building reduced its annual kWh from 179,466 to 41,897, for a total annual energy savings of nearly 77%. The annual reduction of greenhouse gas emissions is equivalent to 97.1 metric tons of carbon dioxide.